I launched my new site yesterday.

If you stop by, you’ll see that it’s entirely different from anything I’ve done before. It’s a whole new design, built on a whole new system, with entirely new features.

By way of showing you around the new digs, here are some highlights:

My main goal in launching the new site was to begin marketing my services as a designer. The front page now focuses entirely on communicating what I do. The new Work section highlights some of my recent work. I’ve decided to use brief descriptions of what the goals of each project were, followed by a large screenshot of the design. The new work section also comes with its own RSS feed. More details on that to follow.

I love to write and I love to share. For a while now, my blog has consisted of both original content, as well as links to what other people are creating. The blog, then, is still a major part of the site. I’ve created a clean, light layout for my writing, while also allowing for big, bold photographic posts as well. I also want to experiment with a more art-directed approach with some of the posts I write, but I first want to let myself settle into my new surroundings.

With the move to ExpressionEngine, I made the decision to introduce a new RSS feed structure. The main feed — the one you’re subscribed to now — will behave as it always has, as a combination of my writing and the things I share.

However, if you prefer to subscribe to just my writing or just the things I share, or would like the two split in your RSS reader, then you can subscribe to the dedicated Blog or Aside feed. There is also a Work feed for my projects, which will remain separate from all other feeds.

When I made the decision to go this route, I was looking at how others were handling the way their RSS feeds behaved. I’ve always liked how John Gruber handles his link posts: the title of the RSS feed item links to the page he is sharing, not to his own site. When Shawn Blanc introduced a similar approach to his feed, I knew I wanted to eventually head down that path myself.

When either Shawn or John posts a link to another site, the title that appears in your RSS reader looks no different than any other feed item. However, when either of these gentlemen write original content, those posts are marked with a unique symbol — John uses a star while Shawn uses a large plus sign.

As I was working on my own feed structure, I started to wonder whether this approach should be reversed; original content should look and behave like original content from other sites’ feeds, while links to other pages should be differentiated in some manner. With this thought in mind I made the decision to include an infinity symbol ∞ with the link posts, to differentiate them from posts that have normal behaviour.

As I wrote last week, there has been a major change under the hood of the site. Previous versions have run on WordPress or Tumblr. This new site runs on ExpressionEngine. While I still plan to use the other systems I have learned, I have fallen in love with ExpressionEngine and wish to do more with it.

Every Good Launch Needs a Cause

It is amazing that I have the opportunity to communicate to you over a shared network connection, to share what I have created and what I’m thinking. However, for a billion people in this world, the main question on their mind is not “I wonder what’s happening on Twitter today,” but “where will I get my next drink of water?”

With that in mind, I have launched a Charity:Water campaign called “Every Good Launch Needs a Cause.” The goal is to raise $500 to help bring clean water to those in need. 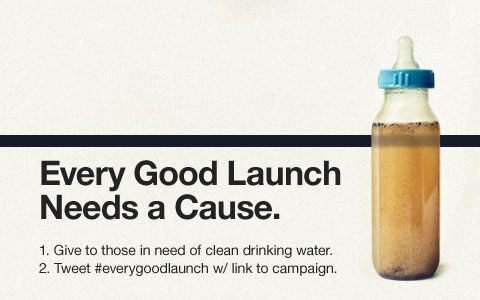 To raise awareness, I’m giving away 3 photograph prints from my friend Jorge Quinteros. Here’s how to enter the contest:

Everyone who commits to giving and tweets their intentions will be added to the draw. The contest will close on December 3, 2010. Winners will be announced on Twitter that day.

The goal is to raise $500, which will provide clean drinking water for 25 people.

Thank you so much for joining me on this journey. I’m so proud of the new site, and excited for the opportunities that are coming my way. I’m looking forward to sharing them with you all.

※ Permalink for “The Launch, The Switch, and The Contest” published on date_to_rfc822