Timing is everything, they say. Come up with something too early, and you’re ahead of your time. Delay too long and you’re late to the party. Those who know me know I’m rarely too early and tend to aim for “fashionably late.”

A couple months ago, I began a project that depended on timing. It was born out of a desire to help those who were affected by earthquake that hit off the coast of Japan. I also wanted to create something that represented the connectedness of our world, going beyond the visible connections created by social media and showing the invisible connection of our hearts.

And so I started the Love for Japan project. The plan was to create a community-created letterpress poster, with proceeds from the sale going directly to the Japanese Red Cross fund for the relief effort.

Unfortunately, around the same time I was going through my own personal disaster. Those who follow me on Twitter are aware of the situation surrounding my mom’s recent fight with cancer, so I won’t rehash all of that here. As hard as I tried, unfortunately it did cause me to delay the completion of the Love for Japan project much more than I had hoped.

There is still great need in Japan. As I wrote before, Japan is one of the most well-prepared nations in the world to face such a tragedy, however there is still a great need out there. People are still hurting, and the Japanese Red Cross is still accepting donations for the relief effort.

And so, it is my hope that even though the mainstream media has moved on to more recent news about celebrities having secret children and yet another missed apocalypse that those of us connected by the internet will still remember the people of Japan.

I need to apologize for the wait. To those who pre-ordered posters and to those who had waited for the design to be completed before ordering, I am sorry. It’s late, I know, but I believe it’s beautiful: 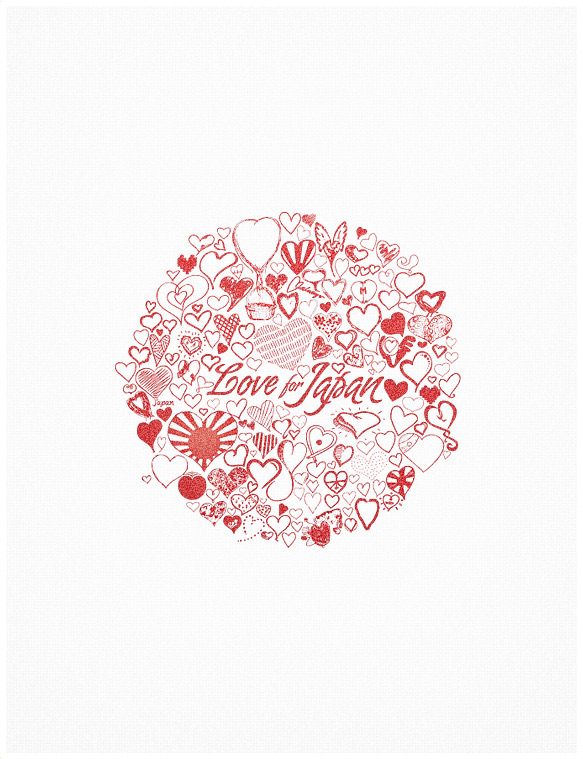 I want to especially thank Mike Precious, who designed the Love for Japan site. It is truly beautiful, and I couldn’t have asked for a more amazing partner in this project. He has been incredibly patient and gracious.

I truly don’t know what the response will be at this point. I was blown away when over 160 heart drawings were submitted. I have great hope that I will be blown away again by what I know to be the amazing support and love from the internet community. I leave it in your hands now.

※ Permalink for “Love for Japan: The Update” published on date_to_rfc822