It has always baffled me when a company offers a lower salary to designers than to developers. My assumption is this derives from an inaccurate understanding of what design is and the role it plays in creating a product or system.

A designer’s role is not to make something “pretty” or to help a product “stand out.” It is to identify a problem, iterate on potential solutions, and bring the resulting product to market. Or, as Steve Jobs famously put it:

Most people make the mistake of thinking design is what it looks like. People think it’s this veneer – that the designers are handed this box and told, ‘Make it look good!’ That’s not what we think design is. It’s not just what it looks like and feels like. Design is how it works.

Even the bots don’t get it

Recently, I’ve been seeing ads from a company called B12 who claims to use artificial intelligence to design websites in 60 seconds (in my day, we called these “templates”).

The example provided is a website for a preschool. On the left is presented what’s purported to be an old, crusty layout juxtaposed with a sleek, modern layout on the right. Unfortunately, this example also shows a fundamental lack of understanding of the purpose of design. 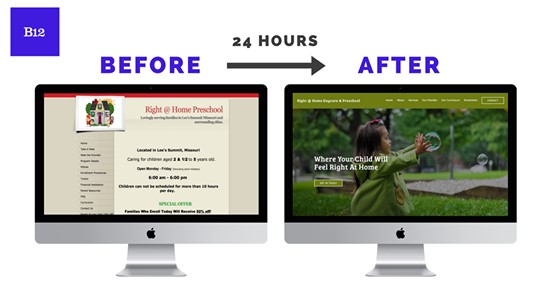 No doubt, the website on the right looks nice. It fits into the latest design trend of having a minimal layout, a massive background image with a text overlay, and a single primary call to action. It’s probably even responsive, likely tucking all of that useful navigation into a hamburger.

In contrast, the website on the right tells me my kid will feel “right at home”. However, I have no idea where or when they’ll feel this. I’m sure I could click that green button under the main headline to find out more. That is, if I’m not colour blind.

Of course, I might not even get that far if I’m part of the 23% of the population of Missouri that is underserved by broadband connectivity in the 42nd most connected state in the union because that picture is so fucking big.

There are certainly aspects to design that require creativity and even an artistic flair. Understanding typography, colour theory, Gestalt laws of grouping, and many other facets of design are certainly critical to the acceptance of your solution into the marketplace. However, these are not the only aspects to design. You must also understand the constraints and objectives of the audience you are designing for and the context and medium through which you will communicate with them.

Design isn’t just how it looks. Design is how it works.

※ Permalink for “Design is how it works” published on date_to_rfc822